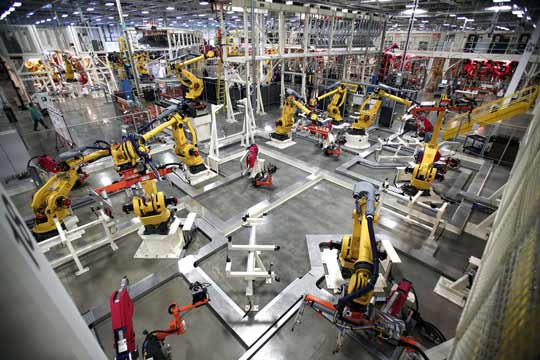 Economists worry we aren’t prepared for the fallout from automation

Too much time discussing whether robots can take your job; not enough time considering what happens next.

Are we focusing too much on analyzing exactly how many jobs could be destroyed by the coming wave of automation, and not enough on how to fix the problem? That’s one conclusion in a new paper on the potential effects of robotics and AI on global labor markets from the US think tank, the Center for Global Development (CGD).

The paper’s authors, Lukas Schlogl and Andy Sumner, say it’s impossible to know precisely how many jobs will be destroyed or disrupted by new technology. However, they add, it’s fairly sure there are going to be significant effects — especially in developing economies, where the labor market is skewed toward work that requires the sort of routine, manual labor that’s so susceptible to automation. Think unskilled jobs in factories or agriculture.
“Automation probably won’t kill jobs, but it’ll create more bad ones.”

As earlier studies have also suggested, Schlogl and Sumner think the effects of automation on these and other nations are not likely to be mass unemployment, but the stagnation of wages and polarization of the labor market. In other words, there will still be work for most people, but it’ll be increasingly low-paid and unstable; without benefits such as paid vacation, health insurance, or pensions. On the other end of the employment spectrum, meanwhile, there will continue to be a small number of rich and super-rich individuals who reap the benefits of increased productivity created by technology.

These changes will likely mean a decline in job security and standards of living for many, which in turn could lead to political dissatisfaction. (Some suggest we’ve already seen the early impact of this, with US cities where jobs are at risk of automation more likely to vote Republican.) Schlogl and Sumner give an overview of proposed solutions to these challenges but seem skeptical that any go far enough.

One class of solution they call “quasi-Luddite” — measures that try to stall or reverse the trend of automation. These include taxes on goods made with robots (or taxes on the robots themselves) and regulations that make it difficult to automate existing jobs. They suggest that these measures are challenging to implement in “an open economy,” because if automation makes for cheaper goods or services, then customers will naturally look for them elsewhere; i.e., outside the area covered by such regulations.

A related strategy is to reduce the cost of human labor, by driving down wages or cutting benefits, for example. “The question is how desirable and politically feasible such strategies are,” say Schlogl and Sumner, which is a nice way of saying “it’s not clear how much you can hurt people before they riot in the streets.”

The other class of solution they call “coping strategies,” which tend to focus on one of two things: re-skilling workers whose jobs are threatened by automation or providing economic safety nets to those affected (for example, a universal basic income or UBI).
“Retraining workers is expensive, and sometimes not possible.”

Schlogl and Sumner suggest that the problem with retraining workers is that it’s not clear what new skills will be “automation-resistant for a sufficient time” or whether it’s even worth the money to retrain someone in the middle of their working life. (Retraining is also more expensive and challenging for developing countries where there’s less infrastructure for tertiary education.) As for economic safety nets like UBI, they suggest these might not even be possible in developing countries. That’s because they presuppose the existence of prosperous jobs somewhere in the economy from which profits can be skimmed and redistributed. They also note that such UBI-related schemes might raise the cost of labor, which in turn would encourage more jobs to be substituted with technology.

All this leads the pair to conclude that there’s not enough work being done researching the political and economic solutions to what could be a growing global crisis. “Questions like profitability, labor regulations, unionization, and corporate-social expectations will be at least as important as technical constraints in determining which jobs get automated,” they write.

Moreover, do Schlogl and Sumner propose any of their solutions? They write: “In the long term, utopian as it may seem now, [there is a] moral case for a global UBI-style redistribution framework financed by profits from … high-income countries.” Now that would certainly get the anti-globalist crowd incensed, and the pair admits that it’s “difficult to see how such a framework would be politically enacted.” Back to the drawing board then.